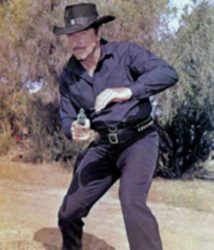 William Preston Longley – better known to many of us as “Wild Bill” Longley – is regarded, by some, as one of the most lethal gunfighters of the Old West. He had a notoriously short temper and killed men for next to no provocation. In fact, he may even have been what today we’d call a psychopath. By his own account, he was instructed from an early age to “believe it was right to kill sassy Negroes,” and the time he hit his late teens he had killed several men.

Longley was born in Austin County, Texas on October 6, 1851 and grew up on a farm close to Evergreen in Lee County, where he mastered the art of shooting. This dangerous gunfighter was known to carry two Dance .44 caliber revolvers, but he used a shotgun as well. At the time of his hanging, on October 11, 1878, Longley said that he had killed eight people – though some have claimed his real kill-total was twice that number.

James “Killin’ Jim” Miller was born in Van Buren, Arkansas on October 25, 1866, but his family moved to Texas when he was a baby. Miller’s parents died when he was young, and he moved in with his grandparents. Yet he was orphaned for a second time when his grandparents were murdered, with Miller himself arrested for the crime, even though he was only eight years old. He wasn’t charged, and was sent to live with his sister and her husband. Later, as a teenager, Miller blasted his sister’s husband in the head with a shotgun after a quarrel. He was handed a life sentence for the murder but escaped justice owing to a technicality.

Miller was later implicated in another shotgun attack, this time on Ballinger City lawman Joe Townsend. Following this incident, “Killin’ Jim” spent time traveling and ran a saloon. He then turned lawman himself, eventually becoming the marshal of Pecos. In 1894, an ongoing feud between Miller and Pecos sheriff George A. “Bud” Frazer led to Frazer shooting Miller in the arm, groin and chest – but thanks to a steel plate under his shirt, Miller survived. How many men did he kill? Some say twelve—others say over fifty. Who really knows?

Born in Alabama in 1860, Dan Bogan grew up in Texas, where he started working as a cowboy from an early age. Bogan seemed to have a quick temper, and he was always looking for a fight, which earned him a reputation as a troublemaker. He later left Texas for Wyoming after being blacklisted in a wage dispute.

It is believed that by 1886 this cowboy had taken the lives of three men. What’s more, Bogan’s rabblerousing didn’t end there, and on January 15, 1887 he murdered Constable Charles S. Gunn, shooting the onetime Texas Ranger with a revolver. Before he could get away, though, Bogan was himself shot in the shoulder and then captured – although he managed to make a getaway in the midst of a raging blizzard.

Bogan later turned himself into the authorities because his wounds had caused him to become too frail to continue living on the run. He later disappeared. Some say he escaped to Argentina.

Love gunfighters? Why don’t you give my Westerns a chance. Just click here to check them out. 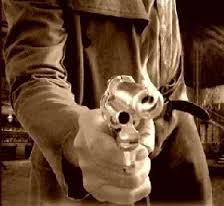