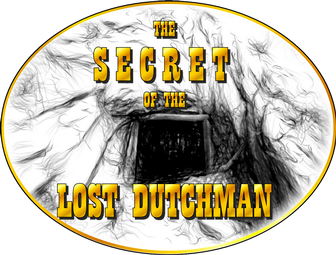 This is the book for which the website was named.  The Secret of the Lost Dutchman is what caused nearly 200 years of of deceit, intrigue, lust, betrayal, and more than 350 deaths!

Here is the Table of Contents for the upcoming book.  Be sure to get your copy of “Massacre In The Superstitions” based on one amazing character in the title book; Miguel Peralta.  Read how his lust for gold cost him him brothers, his honor, and nearly his life!  “Peek Here!”

Chapter 02 Streets Are Paved With Gold – The California Gold Rush

Chapter 05 Gold Fever – The Search For The Lost Gold

Chapter 06 Someone To Trust – A Friend From Far Away

Chapter 07 Either Him Or Me – Betrayal At Geronimo Pass

Chapter 09 Taboo Love – The Love That Couldn’t Be

Chapter 11 Steal My Gold – Shoot Me In My Heart

Chapter 12 Gold To Good – The Secret Kept Until This Day

Chapter 01 – Go West Young Man – Cold Will Kill Ya If The Sun Don’t First
Our story begins with a German immigrant name Jacob Waltz who comes to America with high of making it rich and sending back home for Sarah, his fiancé  and the love of is life.  Jacob’s new life in America is much more difficult that he could imagine and he moves slowly west to find employment and learn the English language.  Jacobs finds himself catching “Gold Fever”.  His lust for gold and riches quickly become extinguished when…  I can’t say anything more or I’ll give it away!

Download and build the Covered Wagon The Lost Dutchman traveled west in:

Chapter 02 – Streets Are Paved With Gold – The California Gold Rush
Working the Vulture Mine in Arizona for two years, Jacob saw little more than hard labor, low pay, 120 degree temperatures, 12 hour days, and the murder of his fellow miners by the company overseers, Jacob knew it was only a matter of time before the next wooden cross at the head of an unmarked grave, could be his.  You won’t believe how difficult a life it is for him!

Chapter 03 – Chance Encounter –  Fate In A Sonoran Cantina
Another several years of nearly slave labor in the mines and nothing to show for it, Jacob was completely defeated and ready to give up on his quest for gold.  Too much Tarantula Juice, a conquistador, a knife fight, a thrown chair changed Jacobs life forever!  This is where it really get interesting!

Chapter 04 – A Proud Heritage – Three Generations Of Conquistadors
Waking up in the middle of the Sonoran Desert with his head on the chest of a Mexican military soldier was the furthest thing from Jacobs mind.  In fact the only thing on Jacobs mind at this moment was his pounding headache.

Jacob quickly learns the military man was third generation Conquistador for the Crown of Spain, Miguel Peralta (MASSACRE!, Book 1 on the series), who for over 100 years have been in charge of removing gold from 18 of the richest gold mines in North America.  Enough gold to send 1/3 back to the Crown, keep 1/3 for his family, and the remaining 1/3 funded all 21 Spanish Missions along the Pacific Coast in California.  Miguel explains…  Spoiler Alert!  I can’t give it way!

Chapter 05 – Gold Fever – The Search For The Lost Gold
Jacob heads out only half believing the story of the secret of richest gold mines in North America, buy quickly realized that he had nothing and had nothing to loose.

Download and build the Assay Office The Lost Dutchman cashed in his gold at:

Download and build the Assay Office The Lost Dutchman cashed in his gold at:

Chapter 06 – Someone To Trust – A Friend From Far Away
Jacob’s thick German accent, quickly gave him the name “The Dutchman.”  Everyone in the west knew about his riches and his secrets.  They all wanted The Secret Of The Lost Dutchman’s Gold Mine.  And, they wanted it at any cost.

Chapter 07 – Either Him Or Me – Betrayal At Geronimo Pass

Download and build the Sheriff’s Office The Lost Dutchman was held:

Jacob became a hermit in his new grand adobe home and farm he built in 1868 along the north side of the picturesque Salt River.  He seldom came out anymore, only to buy his sundries, meats, and coffin varnish whiskey from the Thomas Mercantile.

Trying to understand why he was both blessed by the gold, but cursed by the death of his love and the betrayal…  Here’s a cool twist!

Download and build the Saloon where Jacob met the preacher:

Chapter 09 – Taboo Love – The Love That Couldn’t Be

Over the next several years Jacob became more comfortable with living in fear of everyone around him, except…  Julia Thomas, the owner of the mercantile.  Jacob shopped there often and they would spend hours sharing stories of they youth and how difficult is was for Jacob growing up in Hamburg, Germany, and Julia growing up as a Virginia slave.

Julia remembers when her daddy…  I can’t give away the plot!

Chapter 10 – Swiller’s Mill Washed Away – Out Of Its Own Ashes
Jacob realizing that a marriage would only bring hate and pain, but lived separate lives would hurt more.  They both knew that their love could never be brought into the light of day…  I wish I could tell you here!

Chapter 11 – Steal My Gold – Shoot Me In My Heart
Pneumonia was a difficult disease to beat in 1891, but Jacob was from strong German stock and his love for for his women motivated him each day to try to get a little better than the day before.  He came close!

Finally Jacob was well enough to regain his independence and rebuild his home alone the Salt River.  This time he would built it grander than before.  It only took a few disguised trips into the desert and a quick stop at the Assay Office to convert is pay dirt into a new home, fine furnishings, and new new start.  More to read in the book!

Chapter 12 – Gold To Good – The Secret Kept Until This Day
Once again Jacob turned to his preacher friend; J.S. for solace.  Jacob knew the gold was the answer to every man’s wishes, at the same time his treasure brought him untold pain and suffering.  Jacob wished that he had never found his gold.  You won’t see this coming!